On Monday I attended the charity pub quiz at The Actress to raise money for Parkinson’s Disease. Quizteama Aguilera, despite our exemplary knowledge of lost 90s britpop tunes, did not manage to wint he quiz but, due to the generosity of local people and businesses there were a number of prizes, so we came away with vouchers for MEATLiquor, which we will all very much enjoy spending.  The pub’s landlord, Neil, is also running the marathon for this cause. His JustGiving page can be found here.

Due to a few Monday-night G&Ts and a full-on fridge raid when I got home, I have been trying to eat relatively healthily for the rest of the week, especially with the first fitting of the wedding dress looming.  A lone round of goats cheese in my fridge was threatening to jeopardise this, particularly due to its proximity to a jar of home-made red onion chutney and half a packet of crackers.  If I didn’t turn this into a meal, the temptation to have yet another midnight snack would be too high.

This week, the John Lewis Food Hall had a delightful basket of various different kinds of squash: pale butternuts, the teeny yellow ones and some beautifully vibrant orange acorn squashes. I popped one of the latter into my basket along with a leek, a red onion and some reduced-priced mushrooms. 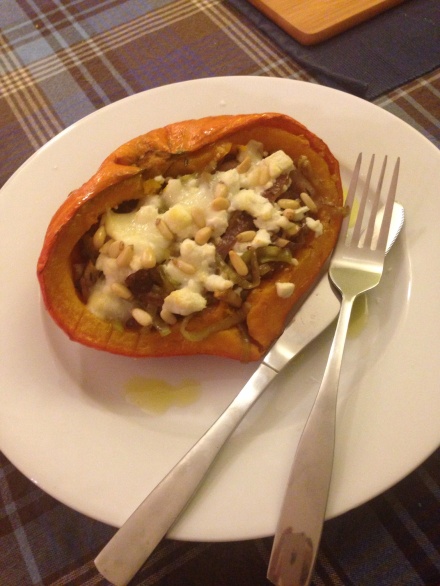 Once home, I halved the squashes and scooped out the seeds and stringy mush from the centre, which left very deep scoops.  I scored the squash, rubbed it with olive oil and roasted in the oven for about half an hour until tender.  In a frying pan, I lightly sautéed the thinly sliced onion and leeks and finely chopped mushrooms in some butter, thyme, salt and the tiniest pinch of chilli flakes and used this to fill the cooked squash.  A crumble of the delightfully smelly goats cheese and a sprinkle of pine nuts later, it was ready to be returned to the oven for ten minutes.  The cheese melted and pine nuts lightly toasted, all it needed was a little drizzle of olive oil before eating in front of the TV.