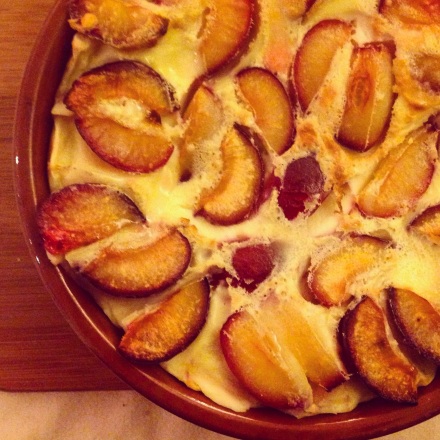 Last week my friend Sam was in the city and so came for dinner.  We had planned to go out in Peckham, but I had Band of Bakers the following day, so was chained to my kitchen whilst I proved and baked my malt loaf.  Luckily she’s pretty happy to sit at my kitchen table drinking tea whilst I cook, filling me in on life in the westcountry.

I had a punnet of plums that had been ripening on the kitchen counter since the weekend, which seems to be a constant feature in my kitchen at the moment.  Many of the fruits we have been enjoying for the past few months are rapidly going out of season and, instead of buying the imported varieties that are creeping on to the supermarket shelves, I am stocking up on good British plums, still very much in season and still in abundance at my local farmers market.

The plums I had were the most common type you are likely to find in autumn – the small, dark purple variety with orange flesh inside.  Similar to those I used for my plum upside-down cake.  They hold together well when sliced and cooked, so I thought they would be perfect for a clafoutis.

For those not familiar, a clafoutis is a dish of fruit baked in custard.  It solidifies to form something half way between a creme brulee and a flan.  It is most commonly made with cherries, although other soft fruits are often used.  It has to be baked in the oven for around 45 minutes – just set the timer if you have a friend over whom you’ve not seen in a long time, as you may forget it’s there.

Preheat the oven to 175ºc.  Butter a medium-sized baking dish.  Arrange the plum wedges at the bottom.

In the bowl of a freestanding mixer, whisk the eggs and sugar until pale.  Add the remaining ingredients and whisk on the lowest speed until fully combined.  Pour the mixture over the plums and bake in the oven for around 45 minutes.  When done it will be puffed up with no wobble in the middle.

Allow to cool a little and serve with a drizzle of double cream.

One Year Ago:  Sausage, Cider and Potato Pie