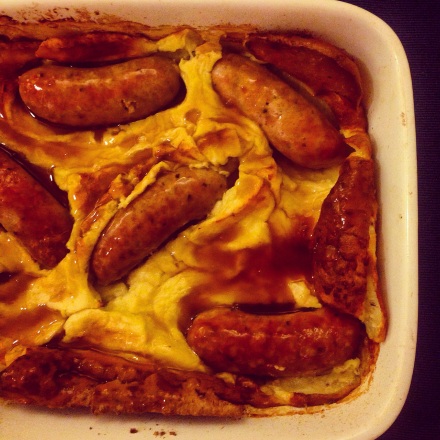 Toad in the Hole

This weekend I visited two south-east London markets in one day.  ‘Double-marketing’ as my friend Jassy called it.  I went to the brand new Peckham Market and then walked down the Queens Road, through New Cross and on to Brockley Market, one of my long-time favourites.  Needless to say I ate far too much.  More on that later…

At Brockley Market, right on the far side, is a stall called The Butchery, at which I am a frequent visitor.  Their moniker can leave you in no doubt as to what they sell, but gives little clue to the fact that they are one of the best butchers in London.  To discover that, one has to try them for themselves.  I first discovered them when their shop appeared on Forest Hill’s London road a couple of years ago, before that they had a pop-up shop that was part of the SEE3 project, supported by Mary Portas, to regenerate parts of Forest Hill and Sydenham.  Since then, I have visited them mainly at their stall at the market which has a good selection of their full range.  Their excellent bacon makes it into my shopping bag with some regularity, and I find I can pick up some excellent cheaper cuts too, like the beef shin I used in my beef shin, black bean and chipotle stew.

This weekend, I was after some good sausages, with this week being British Sausage Week.  I must have been on the same wavelength as my fellow shoppers as, by the time I had arrived at Brockley Market and scarfed down my lunch (beef short rib braccos from The Roadery, if you’re interested) there was only one packet left in the whole market:  a packet of some rather sizeable pork sausages from The Butchery.  So large were they, in fact, that the cost of £6.60, nearly double that of supermarket sausages, barely caused me to bat an eyelid.  I was happy to pay this and to take them home.

These sausages had a very special purpose:  they were going to be made into one of my childhood favourites, a dish that I had not eaten in some time but had been craving ever since the weather turned cooler.  Toad in the Hole.  With such an unappealing name, it is easy to see why those who are unfamiliar would turn up their nose.  For the rest of us, mainly those of us who grew up in Britain, went to a British school or have British relatives, the combination of sausages and Yorkshire pudding, doused in gravy, is the ultimate in comfort food.  My mother, undisputed queen of all things batter, makes an excellent one.  Her secret is to make sure the fat in the pan is very, very hot before you add the batter.  She also makes excellent yorkies and pancakes using the same principle.

There’s not much else I can add except to say to use the best sausages you can find.  Make friends with your local butcher.  If you’re making a veggie one, Cauldron sausages are by far the best.

Toad in the Hole

Preheat the oven to 220ºc and lightly oil a tin or baking dish large enough to accommodate all of the sausages with some gaps in between.  Whilst the oven heats up, make the batter.  Beat the eggs, egg whites and milk together in a jog.  Place the flour in a bowl and gradually whisk in the wet ingredients until you have a smooth batter.  Season with salt and pepper.  Set aside.

Remove the sausages from the oven.  The fat should be spitting hot.  Stir the batter a couple of times and then pour it into the tray around the sausages.  Return to the oven for 20 minutes until the batter is puffed and golden.

Douse with gravy and serve with green vegetables.

2 thoughts on “Toad in the Hole for British Sausage Week”