My South East London Kitchen is already up and running.  I hope that you will stop by from time to time and have a read.

Thank you for all of the comments and support on The Boozy Rouge, I hope that you will enjoy our new home just as much.

Street food has been around in London for longer than you think.  Long before the Thames ceased to be a working river, oysters were sold on the banks for hungry dockers.  During the 18th and 19th centuries, baked potatoes were sold from shop fronts and house windows in some of the more notorious London slums as a form of cheap sustenance.  And we all remember the ubiquitous kebab vans outside of late night bars and gig venues in the more recent past.

In recent years, however, street food has taken on a new form offering affordable gourmet food to Londoners.  Whether on their lunch hour or lazily meandering around markets at the weekend, the street food van is never far away.  Once, Borough Market was the only real option for street food, but more recently markets have begun to pop up across the capital, some in rather unexpected places.

Poplar, in East London, is not the first place you think of as a gastronomic destination; but the new Bite Street Food collective are seeking to rejuvenate the culinary reputation of the area right at its centre:  Chrisp Street Market.  With traders hailing from the local area, and across London, and entertainment from local performers, a charmingly frayed town square is transformed into a market to rival any lunchtime markets across London.  I was invited to come down and check it out.  And told to come hungry. 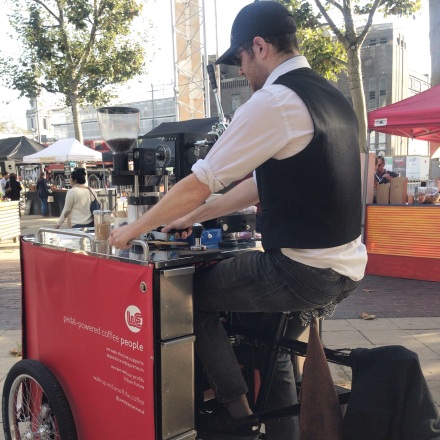 We Walk the Line Coffee.

My first stop, as always, was for coffee.  On the far side of the market, I found a man making coffee seemingly whilst cycling.  We Walk the Line is a social initiative to encourage disadvantaged young people and ex-offenders become entrepreneurs through selling coffee.  The bike powers the grinder, which grinds up the Nude Espresso beans for the coffee.  A very good cup indeed.

An humitas empanada: corn and chilli.

After this, I popped to Boca Empanadas, which sell those little Argentine pastries I love so much.  My favourite is the humitas, which contains corn and chilli.  These were perfect – crispy pastry and both sweet and spicy in the middle.  Limiting myself to one was very difficult.

My plan was to try a number of small items, so that I could sample as much as possible.  On the hunt for my next snack, I came across the bargain of the century:  three jerk wings for ONE POUND.  My weakness for good jerk is well documented and I couldn’t resist.  These were really good.  Spicy with the unmistakable hit of scotch bonnets, with an underlying kick of lime and allspice.

Vegan street food has been growing in popularity in recent years, so I was not surprised to see a vegan vendor on the site, Ruperts Street.  I managed to snag the very last item of the day: a vegan burger.  A sweet potato and lentil patty with a smear of relish on a wholemeal seeded bun.  It came with a delicious kale salad, for extra health points.

The lovely Cat and her cake creations.

Never one to end a meal without having dessert, I popped over to Cat Food Cakes, to see the lovely Cat and her crazy creations.  The market took place on Hallowe’en, so there were some beautiful cupcakes and brownies with spiderwebs, pumpkins and ghosts.  Spying a chocolate cupcake decorated with candy corns, I quickly nabbed it.  A candy corn in the UK is a difficult thing to find.  Sadly Cat did not have a supplier: her boyfriend brought them back from a trip to the states.

Bite will be taking place on the last Friday of every month at Chrisp Street Market in Poplar.  If you should find yourself free on a Friday lunchtime, it is definitely worth a trip over to check it out.  The vendors are not those that you will find at the bigger street food markets, such as KERB, Brockley or Broadway; but they are an excellent representation of cooking in the diverse east end.  I also spied a Ghanian lady selling jollof rice, and a young man making Louisiana gumbo, but could not manage all of these in the same afternoon.  It seems another visit is in order.

For transparency, I was invited to visit Bite Street Food.