This weekend I was a little bit under the weather, so consequently have done little beyond reading from under a blanket and finishing the second series of House of Cards.  I was, however, convinced to get out of the house for a bit to take a little walk to Brockley Market for some things that, I was promised, would make me feel better.

My first stop was Mike & Ollie, whose delicious wraps are always far too good to resist.  I went for the smoked mackerel wrap with apple and beetroot, which was both beautifully autumnal and a threat to any pale-coloured clothing.  On the subject of beetroot, I also picked up a some that made their way into a rather good cake.

A fridge forage that morning yielded some garlic, parsley, a bit of creme fraiche left over from the leek and cheddar pie, a red onion and a little parmesan.  Spaghetti and mushrooms would bring this together into a meal: the former I had in the cupboard, the latter I could get from the market.  I was hoping for a box of mixed wild mushrooms, but could not see any, so settled for a bag of field mushrooms instead.

This really is an incredibly quick supper, perfect for those days when you can’t bear to spend too much time in the kitchen.  Best eaten on the couch.

Cook the spaghetti in salted water according to packet instructions.

Heat the oil in a large frying pan, or chef’s pan, and sautee the onion until translucent – about 5-10 minutes.  Add the garlic to the onions after two minutes of cooking.  Add the mushrooms and cook until tender and browned.

Add 1 tsp of the parsley and stir in the creme fraiche and cider vinegar.  Cook gently until it begins to bubble.  Check the seasoning.  When heated through, remove from the heat and stir in most of the parmesan, retaining a little for the end.

Divide the spaghetti between two large bowls and top with the mushroom mixture.  Finish with the remaining parsley and parmesan.

One Year Ago:  Tarragon Chicken

This morning I woke up with a slight hangover and a hankering for chicken.  It overwhelmed me to the point where I dragged myself from my bed and persuaded Ollie to join me in a walk of four miles across south east London to Brockley Market so that I could buy the best chicken sandwich in the world.

Spit & Roast have been trading at Brockley Market for a year or so and quickly became my favourite street food vendor.  They specialise in chicken: luscious birds spinning on the rotisserie until they have beautifully crispy skin, and some very special buttermilk fried chicken that gets put into a bap with coleslaw and some spiky Korean hot sauce to create a particular kind of sandwich heaven.

The buttermilk fried chicken bap costs £6 and comes piled high with perfectly moist chicken – they will even give you a slick more hot sauce if you ask.  Spit & Roast also offer a quarter, half or whole chicken with chips and will, occasionally, add a pork belly bap to their menu.  This week they had a festive offering with pork, stuffing and cranberry jelly that I saw many market-goers tucking into.  On my next visit, I am going to try the intriguing-sounding turkey poutine.  Roll on next Saturday. 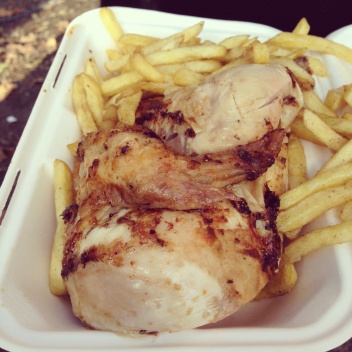 Half a rotisserie chicken and chips

Spit and Roast can be found some Saturdays at Brockley Market and at other street food markets around London.  Check their twitter for details.

Brockley Market has been a Saturday morning habit for me since it opened about two years ago.  I have made it my mission to try all of the street food stands from Mike & Ollie, who have been there more or less since the market started, to Rainbo, who I discovered there only a few weeks ago, to Spit & Roast, very, very often.  A visit to Tongue ‘n’ Cheek this weekend was a first for me, and it was about time.  The stall always looks a little quieter than the others, I’m guessing because people are iffy about offal, but those who have been sing its praises very highly. Apparently the Philly Cheese Steak (£8 and bloody enormous) is the best in London.  The Heartbreaker Burger is a mix of beef and ox heart, not for the squeamish, but a great alternative to the generic beef patties found across town.  It had a delicious moist texture and a subtle offaly hum.  The bread was decent, the cheese was good quality and the pickles sharp, however I couldn’t help but think it was missing something in the toppings – perhaps an extra slick of sauce to bring it all together.  For £5.50 this is an excellent value burger, especially considering the high quality of meat that goes into it.  A must for the burger lover who thinks they’ve seen it all. 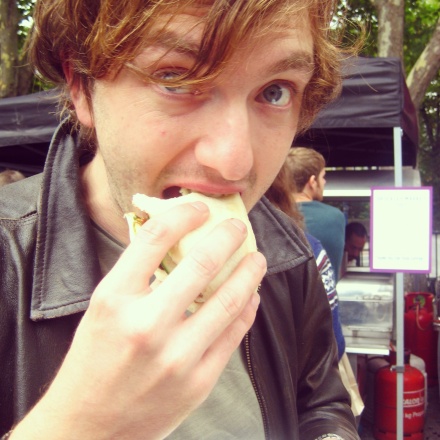