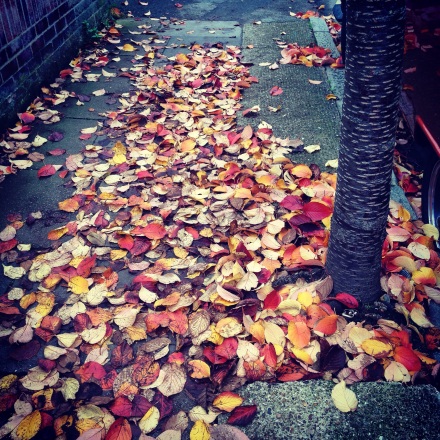 I feel I have to warn you that this is yet another post about butternut squash.  I understand if you want to stop reading right now.  I also feel that I should state an additional caveat: this probably won’t be the last one this year.

I am, as you may have already figured out, addicted to squash.  The big orange pumpkin-like ones, the reddish-brown cricket ball ones, the green ones that look a bit like marrows, and the humble butternut.  Few things signal the arrival of autumn than the sight of these piled up in baskets at the farmers market, still caked in a little bit of mud.

I think my love of them came from my years of vegetarianism, when they were in just about every dish I ate.  I remember the first time I tried one, however, I was not too impressed.  My mother, who cooked swede with Sunday lunch since the beginning of time (and still does!) brought one home from the supermarket ‘for a change’.  After eyeing it suspiciously for a while, she peeled and de-seeded it, cut it up, boiled it and mashed it with a little butter and some black pepper – eactly as she did with the swede.  Needless to say I was not fussed, however that was before I discovered that you could puree it into soup, roast it with allspice and even turn it into dessert.  Now I could never be without it.

Now it seems to be making its way into my cooking with some regularity.  This week I made two dishes of butternut squash, although one was to use up the leftovers of the other.  First, I made a warm salad of butternut squash, lentils, walnuts and feta, all roasted up with a bit of curry powder.  This was concocted simply because I had a lot of lentils and walnuts – my cooking really is inspired by little more than what I happen to have in the kitchen at any particular time.  As this did not use up all of the squash and feta I bought, the leftovers made their way into a simple galette, which was sliced up for lunchboxes.

Somewhere between both of these, I started making plans for a butternut squash curry.  I think I need to branch out a bit more.

Warm butternut squash and lentil salad with feta and walnuts

Warm Butternut Squash and Lentil Salad with Feta and Walnuts

Preheat the oven to 200ºc.  In a bowl, toss together the squash, shallot, olive oil and curry powder until the squash pieces are coated.  Spread them out over a baking sheet and bake in the oven for approximately 30 minutes, until the squash is tender.  Set aside to cool a little.  Meanwhile, cook the lentils according to packet instructions and drain.

In a large bowl, combine the warm squash, lentils, walnuts, feta, coriander and lime juice.  Check for seasoning before serving.

To make the pastry, combine the flour and salt in a large bowl then rub in the butter with your fingers until it resembles coarse breadcrumbs.  Mix together the sour cream, lemon juice and water in a separate bowl, and gradually add enough of this mixture to bring together a soft dough.  Transfer the dough to a floured surface, shape into a disc, wrap in clingfilm and chill in the fridge for at least half an hour until needed.

Meanwhile, preheat the oven to 200ºc.  In a bowl, toss together the squash, olive oil and salt until the squash pieces are coated.  Spread them out over a baking sheet and bake in the oven for approximately 30 minutes, until the squash is tender.  Set aside to cool a little.

Heat some more oil in a large frying pan and gently cook the onions over a low heat until they are very soft and translucent, but not browned.

When you are ready to roll out the pastry, transfer it to a floured surface and roll out to a 30cm circular shape.  Carefully pick up the pastry using a rolling pin and place it on a baking sheet (it may hang over the edges a little at this point, but this is OK.  If it overhangs by more than two inches, you will need a bigger baking sheet.)

In a large bowl, combine the squash, onion and feta and check the seasoning.  Spoon this mixture into the centre of the rolled pastry and spread out, leaving a two inch border around the edge.  Fold the excess pastry over the filling, leaving the middle open.  Brush with beaten egg and sprinkle with a little grated parmesan.  Bake in the oven for around 30 minutes until the pastry is browned all over.  Serve in slices.

One Year Ago:  Brioche Burger Buns 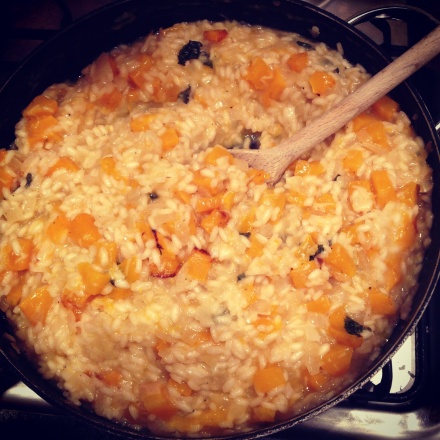 The recipe, by Polpo, can be found here