I have a suspicion that people fear vegetarians at Christmas almost as much as they fear forgetting a present or running out of booze.  Traditional Christmas food in the UK generally focuses around two very non-veggie ingredients: meat and suet, and people find they are often at a loss as to what to what to feed a vegetarian for Christmas dinner.  I’ve heard so many horror stories from vegetarian friends – one was given a plate of vegetables and potatoes with vegetable stock poured over the top (the gravy was made with meat juices), another was given two Quorn sausages in place of the meat and no gravy, and I have been told of people who have been served pasta with stir-in sauce without anything at all from the traditional roast.  I was a pescatarian for twelve years and was never particularly enamoured with the anaemic meat-substitute products, so would often be given salmon or a nut roast, which wasn’t at all bad.  I have often wondered, though, why so many people find it difficult to make inspiring food for vegetarians at Christmas.

One of the most common worries about having vegetarians to Christmas dinner is that cooking for them is yet another thing to do in the never-ending list of tasks in the run up to Christmas. When faced with present-wrapping, endless entertaining and precision timing of the Christmas dinner itself, it is always tempting to pick up a nut roast from the freezer section and douse it in vegetarian instant gravy.  The best vegetarian Christmas dinners are the ones where everybody, or the majority of diners, are vegetarians – I went to a vegetarian pre-Christmas dinner once and the range of meat-free dishes, including a rather delicious aubergine and red pepper strudel, was amazing.  The vegetarian main course is a great addition to any Christmas table as it can be enjoyed by all.  Meat-eaters are unlikely to want to try a slice of a Quorn roast, but they may be tempted by something a little more enticing.

Cooking the filling for the mushroom, chestnut and spinach Wellington

My Christmas vegetarian dish is based around two very hearty ingredients – mushrooms and chestnuts – which create a substantial, and almost meaty, texture and flavour.  This is a mushroom, chestnut and spinach Wellington – a combination of those three ingredients with red wine, breadcrumbs and cream wrapped in puff pastry.  It is very easy to make; the filling is combined in one frying pan and, if you use shop-bought puff pastry, the entire Wellington can be prepared, assembled and cooked in little over an hour.  For extra convenience, this can be made and assembled the day before and then put in the oven half an hour before needed.

The filling is everything a Christmas dinner should be: festive, rich and with a big kick of umami flavour.  The contrasting textures of the crunchy chestnuts, meaty mushrooms and slightly crunchy spinach prevent it being too same-y and bland and the puff pastry gives it enough substance to make it a filling meal.  A slice of this with a sharp vegetarian gravy would make for a very happy vegetarian indeed.

Put the porcini mushrooms in a small bowl and pour over 250ml boiling water.  Leave to soak for 20 minutes before draining the mushrooms, squeezing out any excess liquid, and reserving the water.

Blanch the spinach in boiling water until wilted, then refresh in cold water.  Drain and squeeze as much of the liquid out of the spinach as possible.  Roughly chop and set aside.

Halve or quarter the larger chestnuts, add to the pan with the chopped spinach and cook for a further couple of minutes.  Add the red wine and 85ml of the reserved porcini soaking liquid along with the tarragon, salt and pepper and simmer until the liquid has reduced by half.  Stir in the cream and the breadcrumbs and cook for a couple more minutes, stirring until all of the ingredients are combined.  Allow the mixture to cool.

Preheat the oven to 200ºc / 400ºf / gas 6.  Roll out the puff pastry to a large rectangle – the pastry should be about the thickness of a two-pence piece.  Arrange the cooled filling in a rectangular mound along the length of the pastry, leaving enough pastry either side to wrap around the filling.  Slice the edges into strips and ‘plait’ across the top of the pastry, sealing the edges until all of the filling is sealed in.  Place on a well-oiled baking sheet, brush with egg wash and bake in the oven for 35 minutes or until the pastry is browned – use a thermometer to check the filling is cooked through.  Serve in slices with festive vegetables and vegetarian gravy. 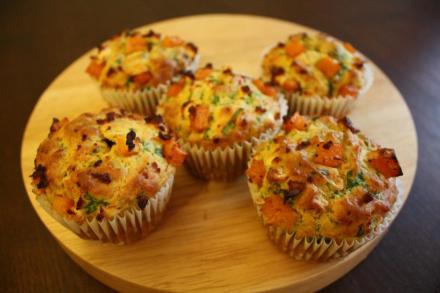 OK, so the pumpkin thing was never meant to be a trilogy – the roasted pumpkin with tahini was supposed to simply be a savoury sequel to the pumpkin pie (and a way to use up the leftovers) – but then I couldn’t resist these muffins.  So this is now a three-parter, but given the abundance of pumpkin and squash at the moments, more recipes containing them can hardly be a bad thing.  Again, these are rather a good way of using up leftover pumpkin or squash as you only need about 250g (the average butternut weighs about a kilo) and you could easily modify the other ingredients to use up leftover bits you have hanging around the fridge, although we’ll get on to that later.

Savoury muffins, for me, are always the acceptable face of baking.  Yes, they’re technically a cake, but they also contain vegetables.  In fact, screaming “They contain vegetables!” is often a useful tool in deflecting the judgemental stares of a friend / relative / colleague to whom you recently bemoaned your weight gain and who knows you probably shouldn’t be reaching for that second (or third…) treat.  The fact that they contain vegetables means that you can get one of your five-a-day on the move and without resorting to supermarket salad pots to keep up the nutrient levels.  I know that two of my friends and fellow bloggers use savoury muffins as a tool to trick their children into eating more vegetables. Yep, if you are a salad-dodger, these are great.  If you eat them warm from the oven, you can even kid yourself that through the consumption of vegetables, protein (cheese) and carbs (dough) that one or two muffins equals a balanced meal.  Almost.

For me, the only cheese to set off the sweet pumpkin is a salty feta – it also keeps its shape during cooking and does not melt into the dough.  This combination alongside the tang of coriander and slight oiliness from the pine nuts makes for a handful of autumnal deliciousness.  As mentioned before, the individual components of this recipe are fairly small in quantity, so it is a great way to use up leftovers.  You could, of course, make some substitutions:  you could forgo the spinach in favour of other greens, replace the pine nuts with chopped walnuts or sunflower seeds or even use a different root vegetable instead of pumpkin.  I’ve tried this recipe with other cheeses and they do not tend to work as well, although if you are a fan of blue cheese, a crumble of Stilton or Dorset Blue Vinny may be an interesting substitute!

Put the squash on a roasting tray and coat with olive oil and salt.  Roast in the oven until tender and crispy at the edges.

Reserve a handful of the squash and tip the rest into a mixing bowl with the spinach, coriander, pine nuts, parmesan and 75g of the feta. and gently fold together.  Add the eggs and milk and beat together.  Sift together the flour, baking powder, mustard powder, salt and pepper and fold into the other ingredients until fully incorporated.  Do not overmix.

Spoon the mixture into the muffin cases, filling each one about ¾ full.  Top the muffins with the remaining pumpkin and feta and bake in the oven for about 20 minutes until risen and golden.

Recipe adapted from one by 101 Cookbooks